For our Chinese readers, Collective Genius was featured in the March issue of Chief Executive China. This monthly magazine included an interview with Linda Hill entitled “The Secret of Leading Innovation: Building Collective Genius.”

On April 10, Linda was interviewed by Chicke Fitzgerald on EGG Live! Click here to listen to the BlogTalkRadio show. This on demand audio series is a part of the Executive Girlfriends Group Vignette Series.

The iTunes link is: https://itunes.apple.com/us/podcast/solutionz-live-blog-talk-radio/id308878820

We are delighted to announce that Collective Genius has been awarded the gold medal in the “Leadership” category of the Axiom Business Book Awards http://www.independentpublisher.com/article.php?page=1920.

The Axiom Business Book Awards are intended to bring increased recognition to exemplary business books and their creators, with the understanding that business people are an information-hungry segment of the population, eager to learn about great new books that will inspire them and help them improve their careers and businesses.

Also, Linda’s TED Talk was featured on the TED homepage recently, and as of this post, has more than 736k views!

From the TED.com website: What’s the secret to unlocking the creativity hidden inside your daily work, and giving every great idea a chance? Harvard professor Linda Hill, co-author of “Collective Genius,” has studied some of the world’s most creative companies to come up with a set of tools and tactics to keep great ideas flowing — from everyone in the company, not just the designated “creatives.”

Why are some organizations able to innovate again and again while others hardly innovate at all?  How can hundreds of people at a company like Pixar Animation Studios, for example, work together to produce blockbuster after blockbuster over nearly two decades – a record no other filmmaker has ever come close to matching? What’s different about Pixar that enables it not only to achieve, but also to sustain innovation? Read more of this post at HBR.org.

When facing the challenge of unleashing organizational innovation, many leaders fail. Some attempt to help their teams flourish by granting almost unlimited freedoms, only to discover that they have created chaos, not high performance. Others try to force their employees’ creativity through prescribed programs and activities, which usually yields humdrum results at best. Read more of this post at HBR.org. 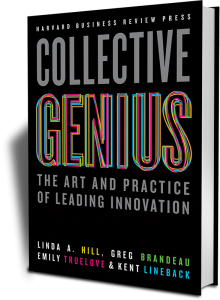 We are thrilled to announce that our book is now available from a variety of online sellers as well as local bookstores.

Click here for our link to online sites carrying the book.

Collective Genius is also available in local bookstores which you can find through the Indie Bound link on this page or through your local Barnes and Noble store.